I have recently started collecting novelty and promotional trannie radios. I now have a fair quantity so decided to give them a page of their own. Because of the number I have it isn't really practical to describe many of them individually, so I have grouped them into categories.

These are normally made to promote some sort of product or service. They are usually made in the far-east and invariably sound awful. This is probably why many of them are in reasonably good condition - they were used for display rather than to listen to!

To start with, here's some cute animals! The elephant is clearly discoloured as the parts that aren't exposed are more blue. The cute bear is presumably based on a character from a Disney movie, since it has 1995 copyright notices by Disney and Hasbro on the back. Does anyone know what it is? 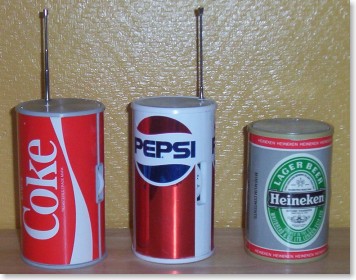 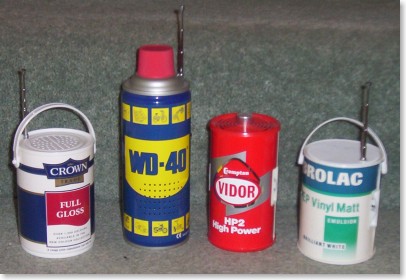 Some cans, for drinking and for DIY.

OK, so the Vidor battery isn't a can but it's clearly based on the same type of set. Most of these have FM so they are probably not that old.

The Heineken one doesn't work, and since the label is stuck right around the can I can't take it apart without damaging it, so it'll have to remain faulty. 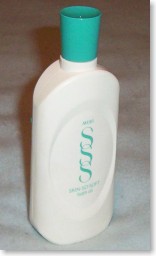 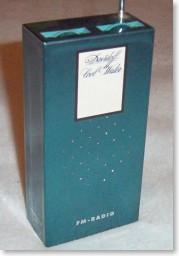 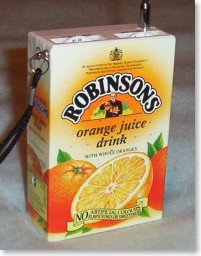 Here's some bottles and cartons.

The Avon Skin-So-Soft Bath Oil one looks just like a bottle from the front, since all the controls and the speaker are round the back. It would have been nice if the cap had been a control, but it isn't. It is in excellent condition, in its box with instructions.

The Coca Cola bottle is the same size as a regular coke bottle. The top clear section is the on/volume control and the clear base is the tuning control. The dark section separates for fitting the batteries. It is fairly dirty and the cap is rusty, but it is in working order.

The Davidoff box design is just a paper printed label stuck around the plastic cased radio, but fortunately it has survived in excellent condition. The radio works too.

The Robinsons one is in excellent condition (almost mint), in its original cardboard mailing box, so I assume it was obtained by collecting tokens from packs.

I guess it's easier to make a rectangular promotional radio than any other shame - just get a stock plain box radio of about the right size and put a sticker round it! 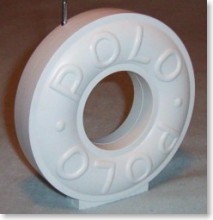 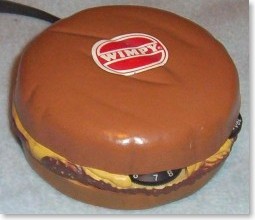 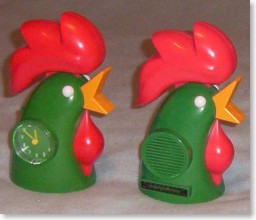 The Polo mint is one of my favourite novelty radios. This is in absolutely mint condition (no pun intended), and has its original white cardboard box and bubblewrap bag.

The Wimpy logo on the burger is a sticker but is obviously original since it's just as dirty as the rest of the set. It doesn't look very appetising - even less so than a real burger! It's in working order, as most of these novelty sets seem to be.

The cockcrows are the "Kellogs Sunshine Breakfast Collection". I actually have two clocks and two radios, although only one of each is shown here. One radio had a broken aerial but is otherwise complete and working. The other radio is missing the aerial and battery cover, works but has a dodgy waveband switch. Both alarm clocks appear to be working, but I haven't checked them for timekeeping. One is missing the battery lid. You have a choice of either the usual beeper or a (rather unpleasant) cockcrow. I will probably sell one radio and one clock (the ones without the battery lids) in due course. 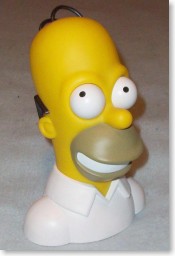 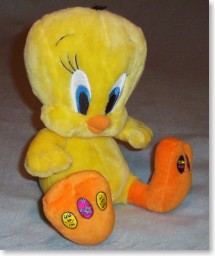 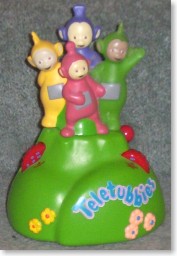 Holmer Simpson's eyes are the tuning and on/volume controls, so he looks cross-eyed on most stations at reasonable volume! The speaker is in the base, pointing downwards, which doesn't help with the sound quality - but it's more of a novelty than a serious radio anyway. He is in good clean condition and working order.

Tweety Pie is a typical soft toy radio, with a plastic box containing the batteries accessed through a velcro gap in the back. The tuning, volume and on/off buttons are on his feet. The tuning has one button to reset to the bottom of the band and another to scan up to the next station. The volume buttons do not seem to work (it's at a reasonable volume anyway), but everything else is OK. The sound is a bit muffled because the speaker is burried inside his head somewhere. Since I collect radios and my partner is into Tweety, this one suits both of us!

The Teletubbies one is in almost new condition. I can't remember if it works or not, but I guess it probably does. The lever at the back is the aerial. I think they could have done a better job of making the characters line up with the top of the hill (they are separate mouldings). 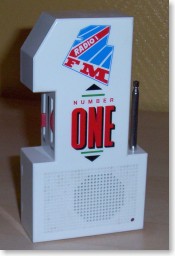 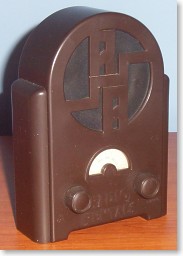 I bought the On the Air microphine at the Autumn 2003 NVCF for about £10. It's in good condition and working order. The ON THE AIR text is lit (somewhat unevenly) when the set is switched on.

The RADIO ONE FM set is another eBay purchase - it cost around £10 I think. It is complete and in clean, tidy condition. The battery compartment cover is present - these often seem to be missing. It is in working order, and as expected for this sort of set the sound quality is awful. Simon Hockenhull told me that he bought one new at a Radio One Roadshow (and confirms that they do sound awful) so I assume they are official BBC products.

The Radio Rentals "repro" was sent to me free by a forum member after I asked in the forum about one that was listed on eBay. 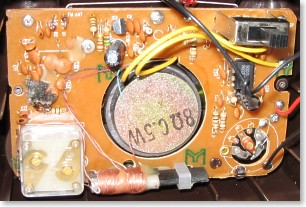 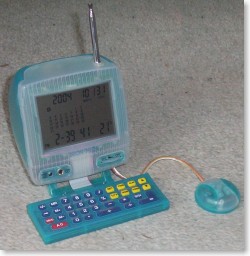 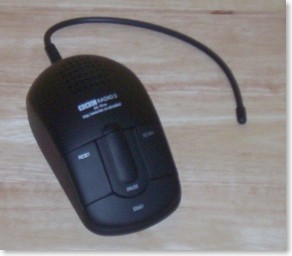 The Zeon Tech computer is not just a radio - it's also a calendar, clock, thermometer and calculator. The radio is FM only and is controlled by the two buttons on the mouse. These were being remaindered in Woolworths, so my partner bougt it for my collection for 99p less staff discount!

The BBC Radio 2 mouse was bought on eBay - I think it cost about £20. It's in mint condition. Unfortunately being black it doesn't photograph very well. 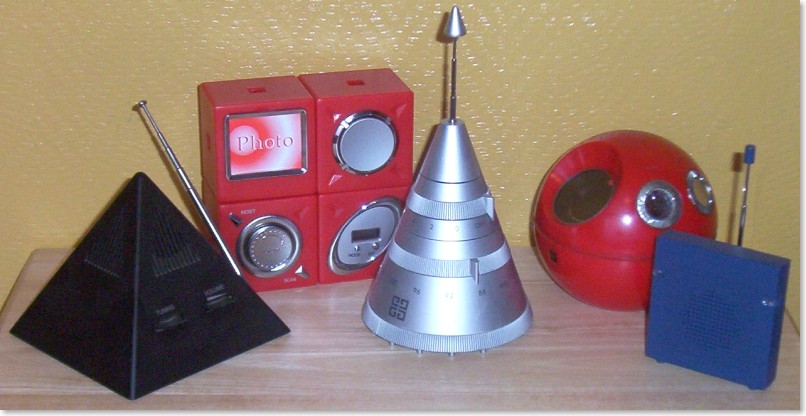 The black pyramid radio has printing on one side so was obviously issued as a promotional item for a company I have never heard of (it doesn't say what they do either). It came in a box of several radios at Wootton Bassett in July 2004.

The square red set is actually four cubes that plug together in any arrangement you like. Top left is just a photo frame, top right is the speaker, bottom left is the radio controls and bottom right is a clock.

The cone-shaped set was bought on eBay for about £5. Case sections are twisted for tuning and volume control.

The National Panasonic Panpet is a fair example of these collectable sets. There is a small crack in the case and the chain is missing. The volume control is loose. It works but is distorted. These were available in a variety of colours, and I'm looking out for some more.

The square blue set is an Arco Spot. I bought it at the December 2003 Wootton Bassett swapmeet for £4.99. It is a fairly modern "designer" radio. It is in excellent condition - almost mint - and has the box & instructions. It works OK, although it is not that sensitive, probably due to the telescopic aerial being only about 5" (125mm) long. 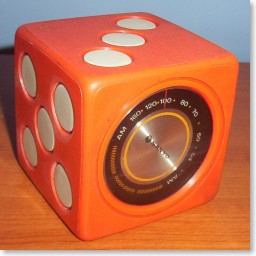 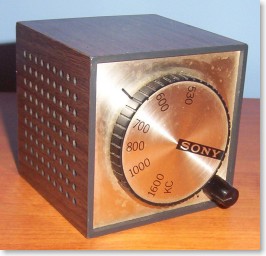 Two cube radios by major manufacturers. The dice is made by Sanyo, and is actually red not orange as it appears here. It's in working order and cost me £10 at the spring 2004 NVCF. I can't remember what I paid for the Sony cube, or whether it works. It has a key-hole shaped hole in the back for wall mounting, but if it was hung on this the text by the volume control wound be sideways! 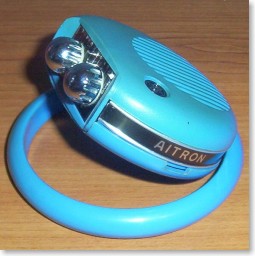 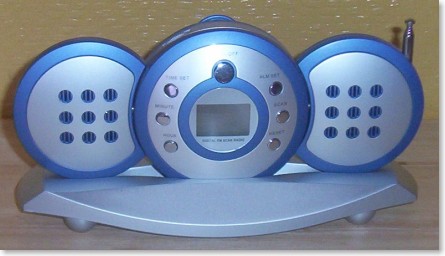 The round Aitron set is similar to the miniature rectangular sets on the Pocket Trannies page. It runs from a single AA battery. This example is rather sad - the plastic is discoloured and the back penel is held with blu-tak.

The set on the right has detachable speakers and can be used as a personal radio with earphones. When fitted back together it sits nicely on the base as shown. This set is new - it cost about £4.99 from a Texaco petrol station with a fuel purchase of £6 or more! 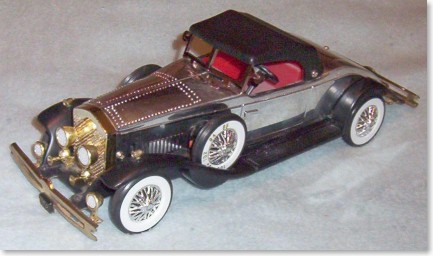 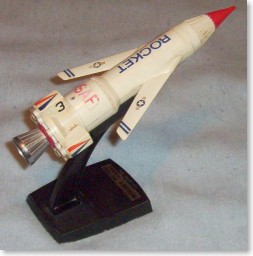 On tle left we have a different sort of car radio! This is a basic plastic model of a classic car containing an FM radio. The spare wheels on either side are the on/volume and tuning controls. The tuning wheel is marked with the frequencies but there is nothing to line them up to. It has a wire aerial which can be laid out if needed. It is in working order.

The rocket is VERY 1970s! It is in relatively poor condition, dirty and faded. The stand is broken but just about clips together OK. It crackles but there's no reception. There is evidence of leaking batteries so the PCB could be corroded in places. The two knobs are covered by the part of the stand that fits onto the rocket. The speaker is in the back (engine), the electronics is in the middle (a very narrow PCB), and the battery fits in the top. Not all PP3s fit - it has to have somewhat rounded corners, and the modern alkaline ones tend to be too square! 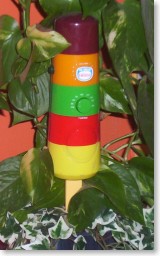 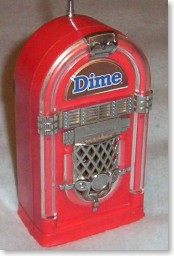 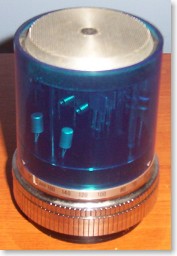 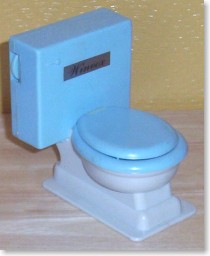 The Fruit Pastels lolly is intended to be stood in the sand on a beach. Since we don't have a beach in our house, it's stood in a pot plant instead! It's in almost new condition and working.

Maybe the manufacturers of Dime Bar thought a jukebox was more attractive than a chocolate bar - or more likely it was an existing design so cheaper to just have their name added! It's fairly dirty and not working. It's completely dead so should be fairly easy to fix.

The blue police light dies light up (dimly) when a button is pressed. Inside are a number of fake electronic components (well probably real components but they don't do anything). The real circuitry is in the base.

As for the last one, I just say it's ideally suited for listening to TalkSport....