This page contains is intended for those manufacturers where I only have one model to include. Once there is more than one, the manufacturer will get its own page. This is simply to avoid cluttering the website with pages that are only have one set.

This is the original version of the Freeplay as designed for use in Africa etc., not the more lightweight UK consumer version. The story of how Trevor Baylis came to invent the Freeplay and the problems he had turning his ideas into reality is well known and publicised, so I won't go into details here.

There is some interesting information on this page at Lee Electronics. More can be found by doing a Google search for "Trevor Baylis". 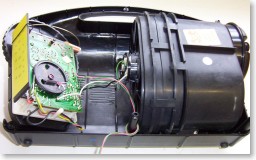 I purchased this set on eBay in mid 2003, but cannot remember how much I paid. I think it was around £25. It is used but in excellent undamaged condition and full working order. Since I could not find any internal photos on the Internet, I dismantled my set for these photos.

The radio itself appears to be a standard design based on a single IC. When the radio is switched off the generator output is short-circuited so it runs down much more slowly. Despite having a speaker rated at (apparently) 5W, the audio output when powered by the generator is probably only a couple of hundred milliwatts. The set can also be powered by an external DC supply of between 3V and 12V. This input has a series diode to protect against incorrect polarity. I assume that the generator only produces about 3V or so, and that the set will produce more power on a higher voltage external supply.

The generator has a sticker with a skull and crossbones logo and "DO NOT OPEN" - so I didn't!

This interesting French was bought on eBay for me by my partner for Christmas 2003. As the photos show, it has a clear plastic case and an internal pink neon tube which lights up when the set is on.

Although it claims to be French, I think the electronics are constructed in the far-east, and it is just assembled in France. The standard of assembly is not very good - the knob bushes to not locate properly with the holes in the case for example. There is a small light behind the tuning dial which is pointless, because the tuning dial is metal (so no light gets through), and because it is completely drowned out by the pink neon light. It is obviously part of the electronics assembly that was bought in, and nobody thought to remove it.

The case is held together with small metal brackets screwed to the case in the corner. These screws go into tapped holes in the plastic, and with my set the plastic has broken away in these places. Someone has fixed the case back together with sellotape. I will probably arrange some larger brackets to cover the broken sections and allow new holes to be drilled.

The set has a reasonable sized speaker and actually sounds fairly good, particularly on FM. I would imagine this set would be quite expensive new, since it would be sold in the sort of hi-tech gift shops that also sell plasma lamps etc.

Simon Hockenhull describes the repair of this set in the Recent Repairs section. He also kindly provided the photo.

This is another micro-sized radio, which was initially in a fairly poor state. The case fell apart (the nut for the fixing screw was originally glued to the back of the speaker but has come unstuck) and there were signs of battery corrosion inside.

I found some interesting information about this set on Pete Roberts' website here: http://hometown.aol.co.uk/PeteRoberts007/microradio/yura.htm. I emailed Pete for more details and he very kindly offered to repair my set for me. It is now working very well - much better than many far-eastern pocket trannies! Details of the repairs are in the Recent Repairs section.

The leather pouch is worn but is intact. I think some black shoe polish will bring it up nicely.

I bought another one of these sets at a recent NVCF. The radio itself is in a poor state but it came complete with a better pouch, charger, instructions and polystyrene box inserts. These items with my restored radio will make up a nice near-complete kit.

This is an interesting thing. It's in the military style that was popular for a time in the 70s. It looks just like a Philips, and even has a Philips style model number. But it's a Radiola - no mention of Philips anywhere. I understand that Radiola was the Philips brand in France - can anyone confirm this?

Also, it's a LW only set. There aren't many of these about. In the UK that means it'll pick up Radio 4 and whatever's on 252 now, and a couple of foreign stations - so I doubt it was intended for the UK market. Maybe there were a couple of decent French pop music channels on LW in the 70s?

What caught my eye was the Radiola 90AL038 and it is the first LW only set I have ever seen. You are probably right about it being French because even today there are 4-5 high powered French stations on the Long wave band, starting from the lower end on 183Khz is Europa1 with most of its programmers in French, moving up to 216Khz is Radio Monte Carlo, on 234Khz is RTL again mostly French speaking pop music station and finally on 252Khz is the powerful Algerian station with a mix of French speech and Arabic music. This last transmitter is possibly the reason why RTE are having second thoughts about using the old Atlantic 252 transmitter as its coverage is limited by interference from Algeria to sometimes less than that provided by their existing medium wave transmitter on 567Khz!

Ahhh - a real car radio, from the days when car radios were easy to operate while driving, and weren't covered in tiny buttons and fancy flashing displays. And there's none of that irritating RDS that goes off searching the whole band whenever you drive under a bridge. Five presets is plenty - why do manufacturers now think we need at least 15 when there aren't that many stations on the FM band? And it has a real volume control instead of the current "up" and "down" buttons. If this set had VHF I would fit it in my car! Sorry - but the state of car radios at the moment is a pet-gripe of mine....

This basic set was available in four options, with differing model numbers. The 1072 is the same as the 1070 but has five MW presets and no LW (the 1070 has 4 MW and 1 LW). Both of these models have a "single-ended" output stage - in other words a single transistor in Class A.

The 1080 and 1082 have the same waveband arrangements as the 1070 and 1072 respectively, but have a double-ended output stage (two transistors in push-pull). The advantage of this is that the current consumption is much lower (around 100-250mA, as opposed to 800mA for single-ended). The output power is probably higher too, but this isn't stated on the service sheet. It would be fair to assume that the 1080 series were more expensive!

The set can be changed from positive earth to negative earth easily by means of a switch (some models from this era needed to be disassembled and wires resoldered to change the polarity).

This set was a gift. It works fairly well, but the volume control is noisy and goes from quiet to very loud with a tiny movement. The sound is rather shrill, but the service sheet suggests that some treble boost is added to aid clarity in a car (cars were more noisy then than they are now, so the manufacturers of car radios needed to get the best from the 3 watts or so of output available). It sounds good indoors with the tone at the minimum treble setting.

I have two of these - one white and one red as shown. The red one has a small dent in the front grille and the tuning knob is loose, but works OK. The white one is a bit worse - it's discoloured and dirty and has a very intermittent connection around the volume control. Although these are branded Sony, there is none of the expected Sony quality here - they are just typical Hong Kong pocket trannies and sound like it.

I established the date from this page on Enrico Tedeschi's website.