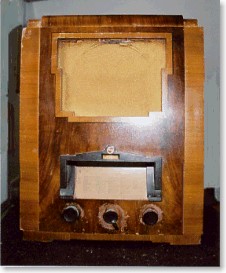 The Philips 585U is a six valve superhet for AC/DC mains. The valves are Mullard side-contact types: Frequency changer FC13; I.F. amplifier VP13A, Detector and AGC diodes 2D13A; Audio amplifier HL13; Audio Output Pen 26, Mains Rectifier CY1; Baretter C1. The set receives Medium and Long wavebands and has a meter-type tuning indicator. On the back are a tone control, a speaker switch and a control for suppressing weak stations. The set dates from about 1934

I bought the set because it was cheap and looked like a challenge. As can be seen from the "before" picture, the speaker cloth was torn, the cabinet badly scratched around the control knobs and the bottom of the dial escutcheon was missing. Internally, it was complete with no sign of recent disturbance of dust or cobwebs.

Initial inspection revealed that the wires to the tuning indicator had been removed and connected together. The insulation on the many rubber and cotton insulated cables crumbled to dust. However, the many waxed paper capacitors had been replaced with TCC "Visconol" tubular types, probably in the 1950s and these were all perfect. The main smoothing electrolytics had similarly been replaced, but the cathode decoupling electrolytics to the audio stages were original and useless. The tuning drive was found to be of very high quality, a phosphor bronze tape being used to drive the dial pointer, rather than the usual cord.

Re-building consisted mainly of remaking the various perished multi-way cables. Each of these contained a number of separate wires inside a braided screening sheath covered with cotton. I remade these by putting new wires inside the screening sheath, covering that with heat shrink tubing to hold it all together and finally covering the whole with cotton sleeving from the type of cable supplied for electric irons and kettles. I finished the job off by whipping the ends of the cotton with black thread to stop fraying.

The tuning indicator was a moving iron meter in the anode feed to the I.F. stage. The meter coil was burnt out. This was probably due to past failure of a decoupling capacitor which had led to the full H.T. voltage being applied across the meter movement. The meter movement itself was very rusty and the coil made of very fine wire. Restoration as original was beyond me, so I obtained a 5mA moving coil meter from Maplin, took the guts out of its casing and fitted them with assorted spacers etc to the base plate of the original tuning indicator. I then trimmed the pointer and used super glue to refit the original pointer. When the set was working again, I used trial and error to find a suitable shunt resistor to adjust the meter to full deflection on no signal.

The set responded to the usual re-forming of electrolytics and performed very well on Long Wave. However, on Medium Wave, no amount of trimming of the RF and oscillator circuits would produce good results at both ends of the scale. Scale readings were also well off at the low frequency end of the band. This chassis has fixed silver mica "padder" capacitors in series with the variable capacitors for oscillator tuning, to give the required oscillator tracking, and it turned out that the medium wave padder was faulty. It was an odd value and I used two mica capacitors in parallel to get a suitable result.

During setting-up, I was running the chassis upside down and the Baretter failed. Maybe it did not like that treatment, but Valve and Tube Supplies came to the rescue. The set now performs very well.

The front of the cabinet was beyond touching-up and was stripped of the old finish. However, the sides and top were not too bad and the old finish was left in place. The front of the cabinet was re-finished with Garnet French polish, which blended very well with the original finish on sides and top. These were freshened up with a few coats of French polish to fill the blemishes.

The original shape of the dial escutcheon was established from the service sheet. A repair was made by grafting a piece of brass angle-section strip into place and fixing it with polyester car body filler. It was then painted to match the existing Bakelite. A new speaker cloth finished the job.