This is another of those "Murphy Monsters". A top of the range set for its day, incorporating the new VHF band. It appears the set was designed before both the ECC85 and the EABC80 were developed, so Murphy engineers had to do it all with 9 (I counted them twice!) separate valves. My example was found in a second hand shop in Bristol, (along with an interesting looking McMicheal 481AC - hopefully coming soon!)

The picture below was taken from Dave Grant's Murphy site. 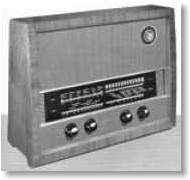 Condition is not bad. The case is fairly un-scratched and free of woodworm. The set has its back and all its knobs (although one is missing its centre gold trim) and has at some stage been fitted with a replacement mains cable. Unfortunately it is of the two core variety, (brown/blue, so presumably the set was working up to about 1970 at the earliest) so will have to be changed to three core.

I don't usually do this until a set has been properly assessed or repaired; to fit a new cable on a scrap set is a waste of effort and flex! There is an exception of course, when the flex on the set is in an unsafe condition or missing and must be renewed prior to any work.

Once the back was removed the chassis was seen to be covered in a thick layer of dust which had to be brushed away. The rectifier valve had also been replaced with a "Pinnacle" branded UU9 (EZ40). The mains voltage selector was still set to 220 volts, so the short wire was moved to the 250 volt tag. The connection seemed rather loose, and as it was unlikely the set would ever be used on 220 volts (although our supply is supposed to be 230v these days, mine is about 245v!) the wire was soldered to the transformer tag, and the tags covered with tape. Preliminary checks indicated nothing alarming on the mains input side, so the rectifier valve was removed and the cathode pin of the valve holder metered to chassis.

The "kick" of the smoothing capacitor(s) seemed good and resistance rose nicely to about 500k-ohms on the meter.

The knobs are fixed with a screw, so a drop of oil was put into the holes to ease their undoing. This seemed to work as all the knobs came off very easily. Next the set was turned onto its side (heavy transformer end downwards, so it's easier to steady) to undo the chassis retaining screws on the bottom of the case. All the connecting wires are long enough to allow the chassis to stand on the bench clear of the case with everything still connected. The chassis has "wings" of bent metal strip so the chassis can stand safely upside down or on either end for easy servicing. I said this was a top-notch set!

The set was connected to the H.T power supply via the cathode pin of the rectifier socket and a 100k-ohm resistor, to reform the H.T smoothing capacitors. As seems often the case with Murphy sets of this era the capacitors reformed with no trouble after about an hour (Perhaps I've just been lucky!).

With the rectifier valve replaced, and the waveband set to MW, the set was switched on and observed for a short while in case of trouble. There were no funny smells or anything else that could indicate a problem. The valves all glowed as expected, but neither of the dial lamps worked (also as expected!).

Tim's Tip: I always renew the dial lamps before working on a set. It is very useful in providing an easy reminder that the set is switched on!

At this stage there was silence from the speaker. Complete silence is always bad news, and a few quick voltage checks established the lack of voltage at the anode of the 6P1 output valve. This was because the anode winding in the output transformer was open circuit (later confirmed by a continuity check). At least there was good H.T to the rest of the set, so all was not lost.

The two sets had cost me 25 quid, so that meant 12.5 incentives to mend this one, not to mention a lovely finished set.

I wondered what had brought this about, and the replacement rectifier valve suddenly became more significant. Let us suppose the DC blocking capacitor at the grid of the 6P1 had become leaky, turning it hard on and drawing much more H.T current than normal. The 6P1 is quite a powerful valve and probably would not be damaged. This would undoubtedly cause the rectifier to fail prematurely. If the rectifier was then replaced, with the faulty capacitor still in circuit and the H.T probably a bit higher. The high current through the output valve continues (the leakage possibly getting worse over time) until the winding burns out.

As this seemed a likely scenario it seemed prudent to check the grid capacitor, along with the output valve's cathode resistor and the bypass capacitor. The grid capacitor (C76 a TCC "Metalmite" 0.01uF) was very leaky with about 20 volts being fed onto the valves grid. The cathode resistor tested ok, but the bypass capacitor (25uF 25v) had "popped" showing it's innards. The two faulty capacitors were duly replaced, along with C77 (a 0.02uF wax paper capacitor for tone controls.)

Now all that was required was a working output transformer. Since the one from my set was dead anyway, it would not matter if I tried to rewind it myself, the best case result being a working set. The transformer was duly removed and stripped. The primary windings, being made of thin wire are, of course, on the INSIDE (Murphy's Law?)!

The speaker windings were removed, the number of turns being noted. The same procedure was used for the hum suppression winding, along with the direction of turns. It is important that this winding is OUT OF PHASE with that of the anode to prevent hum being induced.  My hypothesis was given some credit as I reached the last few layers of the primary winding, which were very black and virtually fell off the former. I estimated the damaged portion to be about 50 turns making a total of about 4000 turns.

At this point I acquired a scrap radiogram - a Raymond electric (don't know the model, it uses 12BE6, 35W4, and 50C5 valves amongst others, now breaking if anyone is interested). I noticed that this had the same type of transformer, although the smoothing winding was a few ohms more. The data for the 50C5 gives an anode current of 49mA, which is more than adequate. It's anode impedance is a bit less than the 6P1, but I thought I would take the chance.

The usurper was a little smaller, so was only held by one screw to the chassis and connected via a meter in series with the HT input in case I had my sums wrong.

The set was switched to MW and with a length of wire connected to the aerial was switched on. A few crackles came from the speaker as the HT rose, which quickly changed into a slightly off tune radio 5 live. The meter showed nothing nasty, and the current rose to a reasonable value. The set worked well on MW, LW and SW bringing in stations across the band with about 10fT of aerial. The Murphy tone control sort of works too. This set has a four position switch, Number 1 (shrill), Number 2 (not bad to listen to), Number 3 (muffled) and Number 4 (speaker the other side of the wall) so the values of the Hunts Mouldseal capacitors may need checking.

As seems common with sets of this era, there was no sound on VHF. The H.T on the anodes of the 6L34 and EC92 (in the VHF head) was checked and found to be slightly high on both. The 6L34 was replaced (with EC91), and the anode voltage appears normal. I don't have an EC92  so the VHF side will have to wait for a bit, until I can get one. (Swap for a Raymond chassis?)

As for the transformer, that is languishing in a small cardboard box until I can get around to re-winding it. This set may be pressed into service as the workshop radio once I have renewed the mains cable - so I'll have to listen to Radio 4 on Long wave for the time being. Providing it fits in the space above the cupboard of course...

I obtained and fitted a working EC92 (thanks to Nick Wilsher) and VHF then worked, but very quietly. Quality was OK, but there is very little volume and no background noise (the AM bands were fine, with volume levels at levels one would expect). It's almost as if the set has low IF gain. Checks reveal anode and screen voltages on the mixer section of the 6C9 are higher than specified, even though HT is slightly low.

Any way it was a start, the situation improved with a few of the Hunts Mouldseal capacitors and the demodulator electrolytic around the VHF section replaced. It was now audible from across the room!

All Hunts capacitors and grid resistor (33k) on the 6C9 replaced and wallop! Lashings of VHF, at decent quality and volume. It really is a lovely set to listen to. It's worth replacing all these Hunts caps on any VHF set to ensure top performance. Even the tone control works properly!

I still needed a 6M2 "magic eye", but decided to try replacing it with an EM34 as I have a couple of those. The EM34 works very well on MW, LW and SW but hardly moves when tuning on the VHF band. I think I may need to alter a few resistance values around the VHF discriminator/AGC output.

I have now obtained a replacement output transformer from a scrap A242, and the set sounds really good. From the same scrap set I obtained a knob with the gold trim intact both of which is now fitted.