This obviously '70s tranny was in extremely good condition. Pity it didn't work! There wasn't even a pop at switch on, and the usual series of tests showed this poor set was pulling 60 milliamps from the parallel connected PP9's. I considered the output stage would be a likely place to find a problem, and sure enough with the collectors of both o/p transistors disconnected, supply current measured approximately 20 mA. When removed the AC188 tested short, but the AC187 seemed OK. I thought it prudent to change both transistors though. 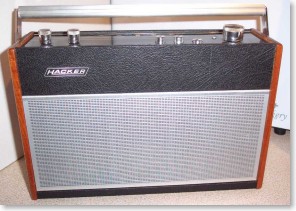 A healthy signal was being developed across the volume control, and could be heard clearly when fed through a handy valve set switched to "Gram". The temperature compensation transistor (T3) was found to be OK once removed and tested. I couldn't see any obvious reason for the failure of the output transistors. At this stage I had no AC187s or 188s in stock, so some second hand AC127/8s were used as a temporary fix. I didn't bother to fit the heatsink, but simply clamped the two transistors to the chassis with a bulldog clip. The set now worked well at next switch on, but did tend to distort at high volume, probably due to the fact the bias wasn't quite right.

Supply current was close to the value specified in the service data (kindly supplied by the owner) and remained stable for several hours as the set was tested at reasonable volume. A few days later the replacement output transistors arrived from CPC. As they were reasonably priced at around 65p each I ordered several of both types. Not only would I have some stock for the future, but I hoped I would be able to select a reasonable matched pair. Using my rather elderly transistor tester I managed to find a pair which were fairly close in Alpha and Beta. In any case adjustment to compensate for slightly mis-matched transistors is provided. 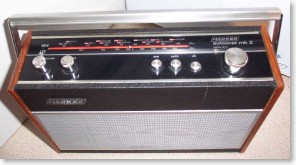 The case style of the new transistors was somewhat different to the originals, being noticeably smaller in diameter, which meant a small adaptation to the heatsink was required….not only that but the lead out was slightly different too. The only information I had for AC187/8 was for the type found in the radio. A multi-meter was used to confirm the device pin-outs. The new AC188s actually had a little tag similar to a BC108. This identified the emitter, as opposed to the usual dot or gap in the lead spacing which usually identifies the Collector in Germanium types. The heatsink in this radio is a commonly found type formed from a small piece of copper sheet bolted to the chassis, with a curl at each end into which the transistors fit tightly. The shank of a twist drill slightly smaller in diameter than the new devices was used as a former to bend the copper. The replacement transistors were then smeared with heatsink compound and inserted into the heatsink. The sleeving from the old transistors was used on the leads of the new ones, to aid lead identification, and the heatsink refixed before the transistors were soldered in.

The set worked again on switch on but was still distorted at high volume. Fortunately the owner had provided me with a copy of the service info, and adjustment of the bias current and linearity is fairly straightforward. This is certainly one case where an oscilloscope is invaluable, one being required to set the output for even clipping of the output waveform at full volume into a dummy load. The output is quoted at 1.6 Watts RMS, a little to loud for my small workshop! The bias current was checked and adjusted again before a final test.

The radio sounded great on both bands, with good tone and sensitivity. It was tested at high volume (lucky the next door neighbours were away!!) for a good few hours, over which the battery current was monitored. No problems showed.

I was impressed with the overall build quality of this set, and is probably one of the best sounding AM transistor sets I have encountered.