Some of these faults may be found during the initial checks before powering the set, but even then it is difficult to be certain that everything is OK. Any of these faults will cause the mains current to be higher than normal, which can cause further damage, if it is not noticed or limited in some way.

Limiting the current is what this project is about. Of course, we could just use a fuse, but the smallest fuse that fits into a UK standard mains plug is 1A, and in practice it is likely to be 3A. Not much good when the set is supposed to draw around 150mA and is actually drawing about 300mA. Moreover, even if a suitable fuse was fitted, and blew, it would not really help you work out what is actually wrong.

The idea behind this project is not new. Engineers and enthusiasts have used it for years - so it is well proven. It is also very simple - connect a 100W lamp bulb in series with the supply to the set. At 230V, a 100W lamp requires about 400mA to illuminate fully. Therefore, the maximum current that can flow through your faulty set is 400mA. At this current, virtually all the voltage is dropped across the lamp, not across the set.

One major advantage of using a lamp, rather than a resistor, is that the resistance of the lamp varies with temperature. When it is cool the resistance is much lower than when it is hot. If your working radio is drawing about 150mA the lamp will be cool, its resistance will be low, and it will only drop around 30 volts - leaving over 200V for the set. Using a clear lamp you will be able to see the filament glow a very dull orange, and will soon get to know from the glow whether things are OK or not.

Of course, the set may not work properly from this lower supply voltage, but it will work well enough for you to know that there are no serious problems. If you want to keep the set running via the lamp, just reduce the voltage selector to a lower position (remember to change it back afterwards). Otherwise, you can remove the lamp once you are happy that nothing catastrophic is about to happen. My unit (described here) has a switch in parallel with the lamp, so that the set can be powered either directly or via the lamp, at the flick of a switch.

There is nothing complicated about the circuit. We have the lamp (LP1) in series with the live side of the mains supply to the set, with a switch (SW1) to bypass it when we wish to run the set directly. The double-pole switch (SW2) shown on the output is actually built into the mains socket used. Readers in countries that do not have switched sockets may wish to use a separate switch.

Note that the lamp is in the live side of the mains supply, not the neutral. This is for safety, so that the neutral side (and the chassis in AC/DC sets) stays close to earth potential no matter how much voltage is dropped across the lamp.

This unit is so simple and cheap, that I encourage all vintage radio enthusiasts to build one! It could prevent an expensive mess!

Construction is fairly basic too - the socket, lamp and bypass switch are mounted on a piece of wood, and connected up as indicated by the circuit diagram. Since the unit is going to be used in the workshop, there is no need to do anything too fancy (as long as it is safe).

When selecting the mains socket, try to find one with a double-pole switch. Many (not just cheap ones) have a single-pole switch that breaks the live side only. This information is marked on the rear of the socket, but when it is in its display packing in the DIY store, you cannot see that! The better quality products (made by MK, Crabtree etc.) should have double-pole switches, but I have not bought these for a while so I cannot be certain. Some shops sell a range of sockets which look like MK products, but are not (they do not have the MK logo on them) - so do not be fooled. If in doubt you may prefer to buy in an electrical shop that have the products loose and who know what they are selling. On the other hand, you could quietly open a packet in the DIY store to look when no one is around - but I did not suggest that! 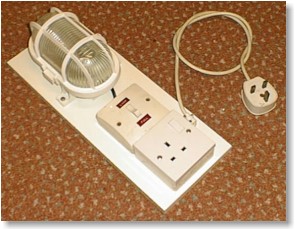 The rest of the bits are standard - a normal single-pole light switch for the lamp by-pass, two surface boxes (it will look tidier if you get two the same depth) and a lamp holder. I initially used a normal batten-holder because it allows the lamp to be seen easily, and quickly replaced if necessary. However, the lamp is rather vulnerable so I replaced this with a bulkhead lamp-holder. These are a bit more expensive, but the budget brand from the DIY store will do. Do not forget to buy a clear 100W lamp bulb, a mains plug, and the cable. If you are lucky, you may have some of these bits and pieces lying around at home already.

As the photo shows, I mounted the components vertically on the piece of wood (laminated chipboard), with the socket at the bottom, the switch in the middle and the lamp at the top. The 3-core 3-amp mains flex enters the side of the socket box, and is fixed securely to the wood with a few cable clips. Connect the neutral and earth to the relevant terminals on the socket. You may need to strip the insulation back some way and fold the bare wires over a few times to make a lump thick enough for the terminal screws to grip (they are intended for much thicker wire). Connect the live wire to a piece of terminal block.

You now need a short piece of two-core flex. Connect one core to the terminal block with the incoming live wire, and connect the other core to the live terminal on the mains socket. Thread this through to the switch box, and connect the two cores to the two terminals on the switch. Connect another length of two-core flex between the same two terminals on the switch and the two terminals in the lamp holder. If you are using a bulkhead lamp-holder or some other lamp-holder that requires an earth connection, use three-core flex.

Finally fit a mains plug, fitted with a 3A fuse, to the end of the mains flex, and fit the 100W lamp into the holder.

Constructors outside the UK will of course have to vary the assembly to suit the locally available electrical fittings. If switched sockets are not available, it would be advisable to provide a separate switch as this saves having to regularly insert and withdraw the mains plug. The unit should work with any voltage supply, providing the lamp is suitably rated.

Label the switch positions "Lamp" and "Direct" or similar, to save confusion later.

The basic use of the unit has been discussed above, and more details are given elsewhere on this website.

Before switching on, make sure the switch is set to the "Lamp" position. When you apply the power to the set watch the lamp. If things are OK it will glow very dimly. If it is brighter there is probably something wrong with your set, which you should investigate before leaving it powered for any length of time.

You may want to try the unit with one or two working sets first; to get some idea of the results you can expect.

When testing radios with powerful push-pull output stages, or other equipment such as valve amplifiers, you may find that the 100W lamp is quite bright even when the set is working properly, due to the higher current consumption. In this case, replace it with a 150W lamp. On the other hand, a 60W lamp would be a better choice when testing a small mains-battery set using the 7-pin battery valves.